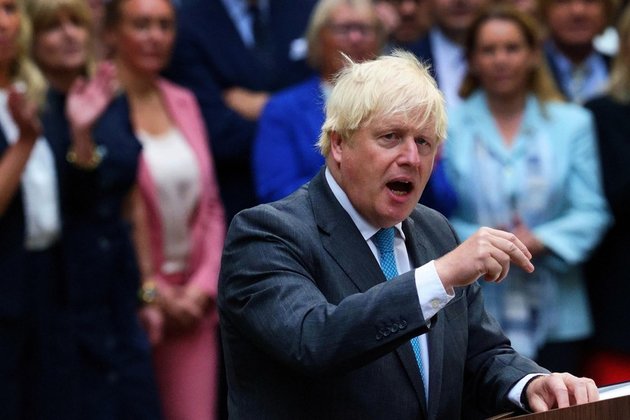 UK Conservative MP and ex-Prime Minister Boris Johnson accidentally praised Russian President Vladimir Putin for his "inspirational leadership" during a debate in the House of Commons on Thursday before realizing his error and substituting his preferred Vladimir, the Ukrainian president Zelensky.

"Thanks to the heroism of the Ukrainian armed forces, thanks in part to the weapons that we are proud to be offering, I congratulate my right honorable friend on his description of the work of the UK armed forces, the weapons that we're sending, the huge list," Johnson began, before blundering. "Thanks also, of course, to the inspirational leadership of Vladimir Putin - inspirational leadership of Vladimir Zelensky, forgive me..." as his fellow MPs chuckled.

While Johnson declared, "I have no doubt whatever that the Ukrainians will win," he also suggested London throw in even "more military assistance" and "more economic support," just to make sure. "If Putin is going to double down on his aggression, then we must double down in our defense of the Ukrainians," he said.

Under no circumstances, he stressed, was Kiev to be encouraged to "trade land for peace" in a way that would permit Russian gas to resume flowing to Europe. Gas prices across the continent and in the UK have repeatedly broken records in recent weeks as Russia has cut back dramatically on the amount of fuel it sends west, blaming the bloc's growing list of sanctions on Moscow for creating insurmountable technical and political difficulties.

Facing a full-blown recession, the UK has reversed a ban on fracking for shale gas, declaring the country's energy supply an "absolute priority" that apparently outweighs the environmental harm caused by the process.